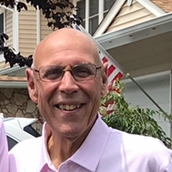 In Memory of Joseph Mulé

A personal campaign sponsored by The Mulé Family

All donations in Joseph's memory will benefit Northwell Health's Department of Hepatology.

Joseph Mulé, 72, of Holbrook, NY passed away at home on Friday, April 30, 2021 surrounded by his loving wife of 43 years and his two children.  Joseph was born in Astoria, NY on Christmas day 1948 to the late Constance and Philip Mulé of Franklin Square, NY.  He is survived by his wife Angela, two sons, Philip and Michael, daughter-in-law Natalia, grandchildren Silvana and Nicolas, siblings Daniel (Carol Jean) of Salt Lake City, UT and Constance (Steven) of Fallston, MD, and many nieces, nephews, and friends who will miss him dearly.

A Long Island attorney, good friend, and family man, Joe practiced law in Nassau and Suffolk Counties for over 40 years, retiring in December 2020.  With his sense of humor, devotion to the practice of law, and his love of friends and family, Joe was the one everyone turned to for advice in their time of need. He had a passion for music and played guitar in a band of close friends for 25 years.

Joe battled several rare autoimmune disorders for over 10 years which ultimately caused his untimely passing. In spite of his physical challenges he remained optimistic and was determined to resume a fulfilling and productive life.    He always maintained a positive attitude and never failed to have a kind word for everyone.    He will be remembered for his laughter and kindness.